A downloadable game for Windows and macOS

A professional UFO Investigator has promised a former student he’d take her to Area-51. Will there be aliens as some Ancient Astronaut theorists suggest? We cannot say. But exotic alien girls or not, Jack Goff has stumbled on the biggest conspiracy of his life…

The J-Files: The Penny Conspiracy is Visual Novel with more in common to the books we read as a kid where we could choose our own adventure. As the story unfolds, there will be more and more paths down which Jack can go. The theory is to add more replayability to the game.

I decided to forego the common RPG-style stats for this one in favour of a story which grows with the characters. It is being built with growth in mind, and I have developed it with an idea to continually adding expansion packs which greatly expand the world by introducing new characters with each pack. Each pack will be designed to be a complete adventure of its own.

Each release, however, will have a complete story which will lead into the next release in the same way as a season of your favourite show.

With this game, I wanted to try a different aesthetic to Shag the Hag, and I’ve improved my skills with lighting and Depth of Field to provide a more artistic and stylized world. It’s slightly toon, slightly retro, and totally in tune with the characters you’ll be meeting.

Ultimately, look forward to an adventure of love, adventure, and wild alien sex!

so this game dead or still being worked on?

Anyone else having a hard time downloading this game?

i also have other links via my website if you're having trouble here.

I'm guessing its on my end then. The download will get to 80%-90% and then stop/cancel like i lost internet connection but i didn't lose connection, and I've tried both of your downloads you have here and it does the same for both. shag the hag downloaded fine. i don't know I'm not to tech savoy

send email to l8eralgames@outlook.com and i'll send a different link. my website is the same mega link as here, i think.

i sent you an email

Love this game, I just hope it is not abandoned.

hey! no, it's not abandoned.

kind of in the process of considering whether to do so or to drop and go to subscribestar only. but that's a pain, because most peeps won't use subscribestar.

so... it's on pause. i have a new game coming (all with patreon-friendly boobs), which is due out shortly and was created as a way to give me time to think about what to do without ragequitting or doing something dumb...

Okay cool because this game is hilarious and I'd hate to see the potential go to waste! NSFW scenes are dope too! I'd go to Subsribestar, just sayin. I'm a big fan and I can't stand censorship!

The new one is called "Her Android Dreams".

After that, I'll be doing a small project on the side to test how popular SubscribeStar will be. If SubscribeStar works out, I'll dump Patreon and be able to do more with Penny. Otherwise, I'll have to redesign the models which is a ton of work. My other game, Shag the Hag also had problems with the sequel's models. Patreon seems to have a thing against small boobs, and they requested I up the sizes because small boobs equals underage.

I find that kind of offensive.

That is offensive, not all women have large boobs (feminists would be pissed). I will keep an eye out for future content, especially Penny! Again, awesome content!

hi there. i'm a little stumped on that one at the moment, as i'm not sure why you can't save. i mean, i can see it says no valid save locations, but that's a little abnormal. i haven't had anyone else with that issue.

googling it as a ren'py thing hasn't been helpful, with some thinking it's an install issue. i thought it might be because you had it on your desktop, but i tried to replicate the issue by putting it on my desktop, and it worked for me.

i'll think about it some more and keep hunting. if i find the reason, i'll let you know.

apologies i can't give you a quick fix on that, but it's something built into the ren'py engine, not something we set manually so i need to figure out if i can tweak something manually for you which wouldn't erm break it for everyone else... :P

can i just say - i've had that up for about 3 months now on f95zone and all over the place, and not one other person has yet commented on that rather obvious joke. congrats on being the first!

Thanks for the kind words :)

I really wanted to do a different art style for this than I'd normally seen, so mixed a little toon and tried to keep the lighting colours and effects something like an umm retro scifi as I see it in my head.

One example is the garage scene with the tentacled alien girl. I kept the room grey and with a bright shining white light. This was to imitate lighting from Tom Baker Doctor Who era with daleks. :D

I had a lot of fun doing this, and I can't wait to do Episode 2!

I liked this a lot and want to support your patreon but on your patreon there's nothing about this game, only shag the hag which I'm not really into.

This one I'm very into but it's the uncertainty that's keeping me from supporting and the lack of information of this on your patreon. Makes me unsure it it's being worked on or not.

I'm following your patreon and this game and would love to see more.

Keep this one up and I can definitely see myself helping out with my support in the future.

Hi. It's definitely being worked on. I'm currently in the process of working on Shag the Hag 2, first, though. I have The Penny Conspiracy to a point where I can now just add in the next Expansions as I make them, and I want Shag the Hag 2 at the same point, so I can alternate updates between the two games.

As soon as I've released Shag the Hag 2's first build, I'll be doing the next Episode of The Penny Conspiracy.

I don't really do monthly updates of my games like some other Devs, mostly because I don't really like half-finishing things. I want to give the best product I can at the time and not be cramming it out to suit a timetable which I can't meet with my current machine.

I also have a third game coming which is a result of testing some mechanics for Shag the Hag 2 (I was testing music, costume, and a few narrative functions and find it often easier to test these in a small game so I don't ruin the code of the base game - I don't usually release those small games, but this one looks cute and fun). Essentially, I want music and the character's costume to change depending on situations/time of day, and perhaps mood.

My ETA on Shag the Hag 2 is sort of murky only because my graphics card is fairly old and I just ordered a 3090. Given these cards are out of stock, I'm not sure whether I want to begin full graphics on Shag the Hag 2 just yet or wait. The benefit of waiting is I might be able to finally do a little more animation if the card gives me the rendering advantages it should.

An idea on why this is important to me is for the reason that The Penny Conspiracy took around 3-4 months of solid rendering to complete, with me at my PC pretty much 15 hours a day, 7 days a week (minimum...). Each image could take anywhere from 1 - 5 hours to render. And that's not including the set-up time on some of them. With the 3090, I'm expecting to cut that down to about a month/month and a half, which would be amazing. 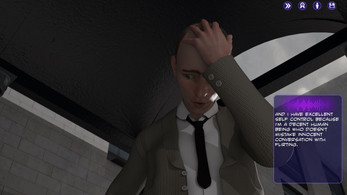 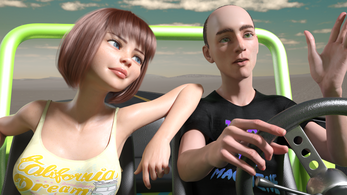 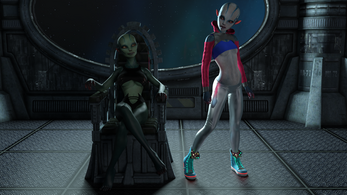 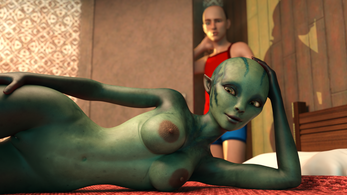 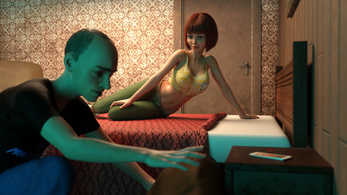 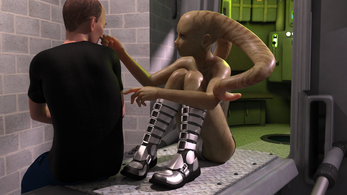